You are here: Home / Archives for Marge Sorge

Fifteen years ago Strategic Staffing Solutions decided to go international but where to start. Europe for sure … but where?

S3’s founder Cindy Pasky looked to her roots. Her grandparents were from Kaunas, Lithuania, and came to Detroit in 1911. She grew up hearing them speak Lithuanian and cook traditional dishes. She visited the country’s capital, Vilnius, for the first time in 1996, while on a cultural tour with the Detroit Symphony Orchestra. At that time Lithuania had been an independent country for just six years. It declared itself an independent political state, free of Soviet Union rule. The Soviets seized the Baltic State 1939 and continued to control it after World War II.

Pasky saw the possibilities and in 1999 opened S3I (the I stands for international) in Lithuania. That country was chosen because of what it could offer S3. Being part of Pasky’s heritage was an added bonus. Geographically, Lithuania could serve S3’s customers in the Baltic and Nordic States and throughout Europe. The decision was a good one. As Lithuania developed as a country its fast growing economy and membership in the European Union and NATO allowed S3 to expand its customer support across Europe.

Originally, S3 helped Lithuanians find professional opportunities in Scandinavia and the U.S. After 2004, it re-oriented the business to attract foreign investors to discover and hire Lithuania’s exceptional talent at home. S3 invested significantly in international promotion programs – often in partnership with Invest Lithuania – hiring and training a staff that could effectively promote Lithuania to S3 clients in the U.S. and the UK.

Today, S3I provides services to companies in the Czech Republic, Denmark, Estonia, Latvia, Poland, Russia, Slovakia and Sweden. The company offers its customers system development services, information technology (IT) consulting and staffing services and customized project solutions. In the past four years, S3I has placed more than 1,800 consultants with major companies in the region.

As it does with every community in which it does business, S3 is committed to helping Lithuania move forward. Following are several examples of the company’s contributions to Lithuanian business, science, arts and culture: 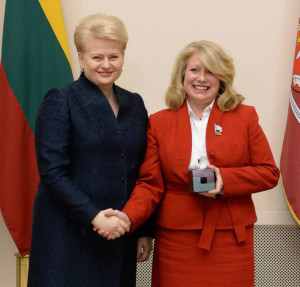 “It is indeed an honor to receive this award, but it is not about what I have done,” said Pasky. “It is about what the S3 team has done not only to further our business in Lithuania but also to give back to the Lithuanian community.”

Not content to just say thank you, each year, Pasky brings the entire S3 International team from Lithuania to Detroit for a week of training and development…and a traditional American Thanksgiving dinner, which she prepares personally and serves to the team in her home.

Latest On The Blog

Recently, Cindy Pasky was awarded the Global Lithuanian Leaders Award for her involvement in investing and promoting Lithuania. Below, you’ll find a video produced that highlights some of the accomplishments of Strategic Staffing Solutions International since it opened in the country in 1999. Here’s a translation of the voiceover of the video as well as the […]